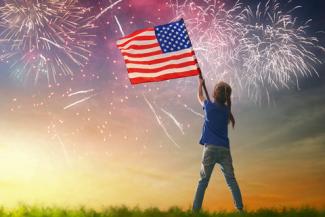 Everyone knows that July 4th is “America’s birthday.” It’s the commemoration of our national independence. A day for fireworks and fun, patriotism and pie. A celebration of America itself.

But in a sense, the Fourth of July is even more than that.

Two-hundred and forty-two years ago, a group of Americans gathered together to sign one of the most extraordinary documents ever written: the Declaration of Independence. Historians debate which day the signing actually took place, but in the grand scheme of things, details like that don’t matter. What matters is what came next.

President John F. Kennedy explained it in a speech he gave on July 4, 1962. Standing inside Independence Hall, the same place the founders gathered almost two centuries before, he said:

“[The Declaration of Independence] was, above all else, a document not of rhetoric but of bold decision. It was, it is true, a document of protest – but protests had been made before. It set forth grievances with eloquence – but such eloquence had been heard before. But what distinguished this paper from all the others was the final irrevocable decision that it took – to assert the independence of free States in place of colonies, and to commit to that goal their lives, their fortunes, and their sacred honor.

That Declaration, whose yellowing parchment and fading, almost illegible lines I saw in the past week in the National Archives in Washington, is still a revolutionary document. To read it today is to hear a trumpet call. For that Declaration unleashed not merely a revolution against the British, but a revolution in human affairs. Its authors were highly conscious of its worldwide implications, and George Washington declared [later] that liberty and self-government everywhere were, in his words, ‘finally staked on the experiment entrusted to the hands of the American people.’

This prophecy has been borne out. For 186 years this doctrine of national independence has shaken the globe – and it remains the most powerful force anywhere in the world today. There are those struggling to eke out a bare existence in a barren land who have never heard of free enterprise, but who cherish the idea of independence. There are those who are grappling with overpowering problems of illiteracy and ill-health and who are ill-equipped to hold free elections. But they are determined to hold fast to their national independence.

In 1861, Abraham Lincoln spoke in this hall, [paying] a brief but eloquent tribute to the men who wrote, who fought for, and who died for the Declaration of Independence. Its essence, he said, was its promise not only of liberty ‘to the people of this country, but hope to the world…hope that in due time, the weights should be lifted from the shoulders of all men, and that all should have an equal chance.’”

When word first came out that the United Colonies were henceforth free and independent States, it didn’t stop at this country’s borders. It flew across oceans and over mountains. It rang in valleys and swept across desert plains. It penetrated walls and fortresses and iron curtains. It launched revolutions and birthed democracies. It was a trumpet call that reached the corners of the world – one that still echoes to this day.

When we celebrate the Fourth of July, we’re observing more than just our nation’s birthday. We’re commemorating an event that shook the world. We’re participating in a grand, ongoing experiment. An experiment to maintain, to protect, to uphold certain truths – that all people are created equal.

On behalf of all of us at RMR Wealth Advisors, we wish you a safe and happy Independence Day!