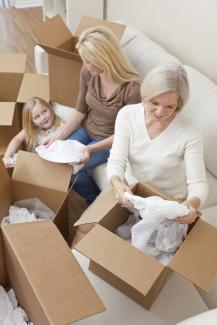 Looking to Retire Closer to Your Grandchildren?

As retirement approaches, many couples start thinking about moving. Nearly two-thirds say they plan to move or will move when they retire. Retirees consider moving for several reasons, including the financial benefits (smaller house) and to be closer to family (grandchildren, in particular). However, moving can get expensive and complicated.

Here are some tips to consider before making this major decision.

1. Analyze the cost of living at your destination.

Moving to another city or state isn’t as simple as it may initially sound. Financial considerations should play a large part in your decision-making. Cost of living, for example, can significantly alter long-range financial plans and require you to make changes to your retirement strategies. Carefully research the area where your children and grandchildren live to see if you can reasonably afford to make the transition. It might be nice to live close to your grandchildren, but if real estate, taxes, public services, and other living expenses are beyond your budget, you might want to examine other options. Affordability, unfortunately, must play a major factor in your retirement decisions.

This step gives you the ability to do some additional cost analyses for moving and, if you decide to rent, a little time. While gauging moving expenses and the physical efforts it will require to make the transition may not be the largest factor in your decision making, it does require careful thought. Moving isn’t as simple as it sounds. Costs can rise over $6,000 in some cases. In the end, you’re putting the emotional tug of wanting to be near your grandchildren on the scale with a retirement that could last a quarter century. The hard truth is: The decision to move isn’t easy. It requires brutal honesty and some sacrifices.

3. Consider renting for the short term before moving.

You’ve done the financial analysis. However, your grandchildren are just too darned adorable to be denied the privilege of spoiling by their doting grandparents. While the new area may be a little more costly, you think you might be able to manage the financial load. You’ve weighed both sides on the scales (emotions vs. budget), and you’re ready to test the waters. You know it’s a risk, so instead of taking the leap, how about renting first? That way you can experience the area without actually making the investment. By renting, you’ll be able to visit your family and your grandchildren and get acquainted with the new neighborhood. You may discover you absolutely love it! On the other hand, you may learn you’d rather stay put and make the occasional long trips to visit.

4. Determine whether you need to work to support your new area’s cost of living.

If you do decide to move and the cost of living is higher in your new neighborhood, you do have an option to make up the difference. A part-time job can fill the financial gap and help fill in the time in a newly retired lifestyle. It may also help you connect with other people—establishing that social network—which makes the transition smoother and easier.

It’s a complicated decision that involves weighing several factors, including your retirement goals, your financial needs, and the lifestyle you want to pursue. If you want to talk it through with us, feel free to reach out anytime.