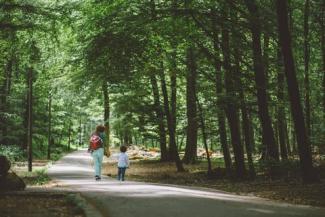 The Origin of The National Park Service

“Everybody needs beauty as well as bread, places to play in and pray in, where nature may heal and give strength to body and soul.” – John Muir

This month marks the 100th birthday of a little-known but historically important law: the Organic Act of 1916. Signed by President Woodrow Wilson on August 25th of that year, the Organic Act created the National Park Service. This is the agency charged with managing, protecting, and preserving our country’s fifty-nine national parks.

If you’ve ever been to a national park, you know what an important responsibility the Park Service has. Every year, they’re the people who have to contend with floods and forest fires. They clean up after the millions of tourists who visit every year. They make it possible to walk amidst the awe-inspiring cliff dwellings of Mesa Verde or behold the faces of our nation’s most legendary figures on Mount Rushmore. They help preserve the fragile ecosystem of the Everglades and Virgin Islands. They ensure the pristine wildernesses of Denali, Glacier, and the Great Smoky Mountains remain unspoiled for us and for future generations to come.

It all started in 1832, when an artist named George Carlin crossed the Great Plains and fell in love with what he saw. But he was startled by how quickly the land was changing, and dreamed of “some great protecting policy of government … a nation’s park, containing man and beast, in all the wildness and freshness of their nature’s beauty!”

Over the decades that followed, many other artists, writers, photographers, and adventurers began dreaming the same dreams. Eventually, the wild places of America came to be seen less as hostile environments to be conquered and more as treasures to be enjoyed—like little slices of paradise on Earth. But it wasn’t until 1872 that the first park was created, when President Ulysses S. Grant established Yellowstone National Park with the stroke of his pen.

More national parks followed toward the end of the century. Sequoia and Yosemite in 1890. Mount Ranier in 1899. Crater Lake in 1902. At first, they were managed with little oversight or forethought. That all changed when Senator Reed Smoot of Utah and Congressman John Raker of California drafted bills to create a single organization that would supervise all the parks.

Despite opposition from the timber industry, the movement succeeded when industrialist Stephen Mather added his influential voice to the cause. (In exchange, Mather agreed to be paid exactly $1.)

The national park system exploded after that. Acadia and the Grand Canyon, Zion and Bryce, Grand Teton and Carlsbad Caverns—all came into existence within 15 years of the new law.

If you’ve ever been to a national park, you know how hard it is to imagine a world without the lush greenery of the Shenandoah or the mighty towers of the Redwoods. You know what a poorer planet it would be without the painterly woods of Congaree or the azure waters of Acadia.

But we would have none of these things—at least, not in the condition they currently are— without the National Park Service.

So if you’ve ever been to a national park, take a moment on August 25 to celebrate the centennial of the Organic Act. The law has a bland name, but the beauty behind it will never lose its luster.

And if you’ve never been to a national park, well … what are you waiting for? There are fifty-nine national parks in the United States. Fifty-nine little slices of paradise.

It’s time to go enjoy them.