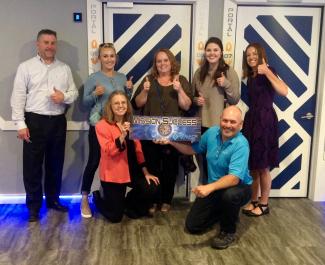 The Treasure of Teamwork

For the 2019 Summer Staff Outing, our crew at RMR Wealth Advisors put our strategizing and creativity to the test at an escape room. Escape In Time, located on the west side of Madison, is merely a front for a privately funded research company, The Deja Institute. The scientists at The Deja Institute have been working for decades to master travel through time and space. Our particular exploration was called Captain’s Cove. Captain McGinnis committed a sailing taboo when he brought his lover, Rose, aboard his ship. Legend has it that a woman aboard is bad luck for sea goers, and the crew took this warning to heart. After mutinying against Captain McGinnis, Rose was thrown overboard by the crew. But, as if things couldn’t get any more arduous for the crew, a terrible storm wrecked the ship. Survivors came across the wreckage and that’s where our adventure began. We had 60 minutes to find the captain’s treasure or be cursed forever. We started out a bit scrambled. It was dark, and cramped, and we spent a good chunk of time just squeezing past each other and running our hands over walls, desperate to find the key to unlock the first door. It became clear early on that teamwork and communication would give us our best chance at solving this puzzle. As we discovered the clues, we worked together to make sense of them. It took some thinking outside the box, but we carefully cracked codes and arranged combinations successfully. With almost 15 minutes left on the clock, we found the treasure and broke the curse! Our mission was a success.

At first glance, it might be tricky to see the similarities between an escape room and wealth management. But after this fun team-building challenge, we all can agree that the components of successful wealth management and solving an escape room are one in the same. It takes strategy, first and foremost. We had to think critically and keep our minds open. Our calculations had to be accurate, and we had to make the most of the tools and resources we were given. Effective communication was an absolute must.

Our escape mission was only an hour, but capturing profits and preserving wealth is an ongoing mission. It’s a similar endeavor in that we are working diligently to help you maintain your treasure and avoid being financially “cursed.” As a team, led by our fearless Captain Erik, we strive to ensure your financial future is a success, and you can trust that our tireless efforts will keep you from walking the plank.

For Your Financial Future!®